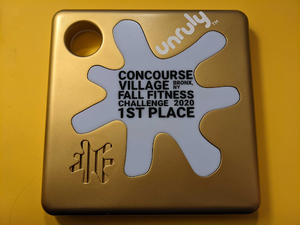 As are many other schools, Concourse Village Elementary School (CVES) is participating in hybrid learning this year. Their Cohort A meets in person on Mondays and Tuesdays and their Cohort B meets on Thursdays and Fridays. Smaller groups of in person students this year grants teachers more flexibility with their lesson plans and collaborative activities.


This new learning style has allowed CVES’ PE teacher, Thomas Girolamo (aka Coach G), to get creative with his physical education by using Unruly Splats. Splats are codable floor buttons that light up, make sounds, and collect points when they are stomped on. Students code the rules to active games on their iPads with the Splats app. Getting the students up and moving and releasing some of their pent up energy is important to CVES and Coach G is having a blast with his new and exciting plans for this initiative. “I believe Splats are great to use because I can socially distance my students from each other while they do the activity,” said Coach G.

Recently, Coach G’s class participated in the Unruly Fall Fitness Challenge. This was a nationwide three week fitness challenge during which students coded and completed fitness challenges. Despite the fact that CVES had to go fully virtual during the middle of the challenge, CVES showed their core value of perseverance and did not skip a beat. They continued to stomp on using their Virtual Splats. At final tally they scored 71 points and walked away with the grand prize of the legendary Golden Splat!

Part of Coach G’s plan going forward  is to create a whole unit that involves using Splats in PE class. Right now, Coach G is using some of the preloaded games on the app such as Four Corners, Relay Race, and Whack-A-Mole as warm-up exercises for his students.

Relay Race has been one of the more impactful games that he has introduced to his students because it brings, according to Thomas, “A new aspect into the normal relay race.”  For students to earn points in this version, they have to stomp on the Splat ten times before the Splat turns green. However, the timing is randomized, making the race more about effort and patience rather than speed. It removes the ‘‘I am the fastest’ mentality and instead allows all of the students to give their best efforts each time  and not shy away from the activity based on their skill level . As Coach G puts it, “Students learn that if they are not patient, it does not matter how fast you are because those who wait will find the most success!”

During the unit-long lesson, students also learn about coding and STEM while being physically active. The older grade levels start off by playing the coded games Coach G has created. By the end of the unit, they work up to creating their own coded games.

One of Coach G’s biggest takeaways has been trial and error with Splats. “Sometimes students may struggle with creating the code or understanding the activity, but learning how to modify or adapt the lesson to their needs is the most important lesson to learn!”  Coach G told us it has been rewarding to see students with a variety of skills having fun and creating a positive learning experience when coding and playing with Splats.

One of Coach G’s favorite events has been the Splat Olympics that the school held last year. Classes were able to participate and compete in a variety of coded games. The students had fun while cheering their teammates during Relay Race, Whack-a-Mole, All the Feet (coded puzzle where students have to get the Splats to be all the same color!), and Race in Place. Coach G even raised the incentives by rewarding Splat Olympic medals to the teams. “The medal was a great way to recognize the students ’ hard work and dedication and they were all so proud. We got to celebrate at the end and take a picture together as a class!” Splats bring joy to all the students at CVES. Coach G is eager to introduce new Splat activities and lesson plans into class in the coming year and is looking forward to seeing what inventions and games his students will create. He hopes to take part in more Unruly events like the Unruly Fitness Challenge and plans to keep their first place bragging rights.